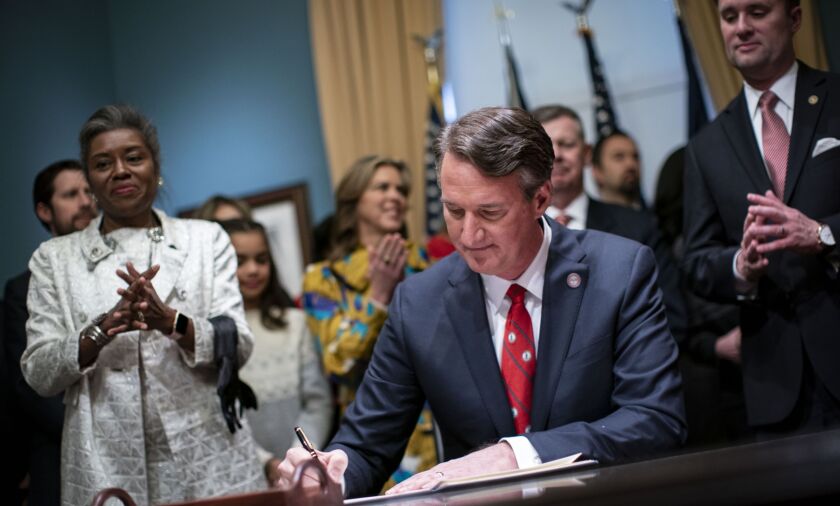 One of the first things Glenn Youngkin did after being sworn in as Virginia’s new governor was to address the Joint Assembly Monday to outline his vision for the state over the next year.

On Saturday, his first day in office, Youngkin, a Republican, signed a slew of executive orders and directives at the state Capitol in Richmond.

The actions included orders that aimed at a planned withdrawal from the Regional Greenhouse Gas Initiative; barring so-called “critical race theory,” GOP shorthand for things like the discussion of the historical impact of slavery and Jim Crow laws on Black people, in public schools; and ending mask-free school classrooms amid the latest omicron coronavirus wave.

The directives included actions to rescind the vaccine mandate for all state employees and to initiate a process to cut by 25% the number of regulations not mandated by federal or state statute.

“We’re going to repeal needless regulations. We’re going to invest in job training. We’re going to foster innovation. And we’re going to win the competition for jobs and corporate re-locations,” he said. “The states around us have created more jobs, grown their economies faster, and took steps years ago that we must take now, lower taxes, business-friendly regulations, workforce development and more. This is a real competition, and to win, we have to ‘play to win.’ “

Republican Youngkin won the general election in November, defeating Democrat and former governor Terry McAuliffe to replace Ralph Northam, who was term-limited out of office.

Youngkin said he backed increased investment in infrastructure, such as mega-sites, “to make sure we don’t lose the next advanced battery manufacturing plant after seeing several go to Kentucky, Tennessee, North Carolina and Georgia.”

He added that the state would make sure key projects at its ports and highways were completed.

“So the message is clear, if your cargo container ship is stuck off the coast of another state come to Virginia,” he said. “We’re ready for your business. And we won’t make supply chain problems worse with regulatory red tape.”

Speaking to the General Assembly leaders, Youngkin outlined a plan to double the standard income deduction for residents, eliminate the grocery tax and end the tax on the first $40,000 in veteran retirement pay.

“Virginians are struggling with the high cost of living, in a commonwealth with skyrocketing housing costs, rising fuel prices, and the silent wage theft of inflation.”

There are economic fundamentals we don’t control in Virginia – that must be dealt with at the federal level.

“But there is one vital thing we can do to help Virginians. And that is remove some of the tax burden — added on top of rising prices for groceries, gasoline and housing,” he said. “That’s why I support suspending the recent gas tax increase for a year and fully eliminating the grocery tax immediately.”

He said giving residents a break on their personal income tax by doubling the standard deduction would providing the largest tax rebate in state history.

“These tax cuts benefit the people who need it the most. And represent the largest tax relief ever given to the people of Virginia, $1,500 this year for the typical Virginia family,” he said.

Youngkin said that education was the key to opportunity and said he wants lawmakers to spend $150 million to start 20 new charter schools.

“Whether they’re called charter schools, lab schools, or schools of innovation — it doesn’t really matter,” he said. “I don’t care what we call it I just care that we do it.”

He also said that coastal resiliency was vital to state and nation.

“It’s critical to our nation because of our Port and military assets in Hampton Roads,” he said. “That’s why we’re going to create the Coastal Virginia Resiliency Authority to battle rising seas and make sure the federal government does its part too.”

Filler-Corn said the governor’s plans would leave many people behind and that despite campaigning as a moderate, he was backing extreme policies.

Gov. Jim Justice made his State of the State address via video last week after he tested positive for COVID-19 earlier in the week. He unveiled the budget proposal at the same time.

“The governor instructed us to build an essentially flat budget,” Dave Hardy, state revenue secretary of Revenue, said in the budget presentation.

Hardy said that state revenue streams were very unpredictable in these extraordinary times.

“COVID and its associated effects have placed unprecedented external pressures on the budget,” he said. “Federal relief dollars (CARES and ARPA) are helpful, but have many complicated strings attached. Public health officials are struggling to predict where COVID may go. Inflation has escalated. All of this makes budgeting very challenging.”

He noted, however, there was an average 5% pay raise for state employees amounting to $114 million in the budget and an additional $41 million for inmate medical care, including court mandates and health care inflation.

Earlier this month, the state reported its general revenue collections for December 2021 came in at $506.8 million, $124.4 million above estimates, and 32.6% ahead of 2020’s receipts. It was the highest growth rate for the month of December since at least the 1970s, according to the governor’s office.

In his State of the State speech, Justice said West Virginia had turned around a decade of population loss with a net gain of 2,000 people in 2020 and 2021.

“We are shedding our image of being uneducated, dusty, poor and backward,” he said.

Still, the state’s economy continues to be impacted by the COVID-19 pandemic, nearly two years after it first hit the state, according to the West Virginia Center on Budget & Policy.

“After historic job losses in the spring of 2020, the state underwent a steep, but partial recovery in the summer,” Sean O’Leary, the center’s senior policy analyst wrote in a blog post earlier this month. “However, growth has been sluggish in recent months, and a substantial jobs gap remains. As of November 2021, total nonfarm employment in West Virginia is still down 25,800 jobs from its pre-pandemic level. Government, health care, and leisure and hospitality jobs make up the bulk of the state’s job shortfall.”

On Monday, the governor held his first COVID-19 briefing since his diagnosis and held the meeting secluded in his private office.

“I’ve got to admit, it’s been difficult, that’s for sure,” Justice said. “But, by the grace of God above, I made it through.”

As of Monday, the governor said there were 20,392 active cases of COVID-19 statewide with the number of hospitalizations at 854. The cumulative percent positivity rate stands at 7.32%.

West Virginia’s GOs are rated Aa2 by Moody’s, AA-minus by S&P and AA by Fitch.