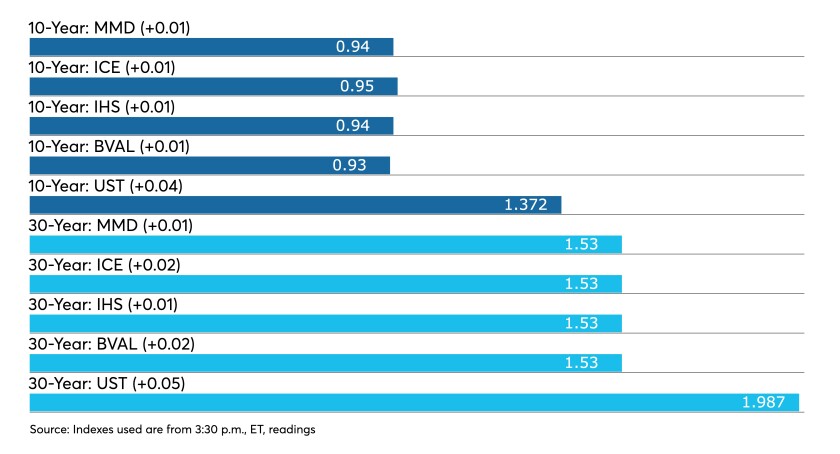 Municipals were little changed to a touch weaker out longer Tuesday, outperforming U.S. Treasuries, which saw yields rise as much as five basis points, while equities were mixed on the day.

Triple-A benchmark yield curves were little changed to weaker outside of 10 years, cutting a basis point or two on very light trading and few deals pricing in the primary.

As the market prepares for a smaller primary calendar (little more than $4.5 billion) for the holiday-shortened week, and about $10.35 billion for 30-day visible supply, fund flows again are worth exploring as a strong demand component throughout 2021 and why.

“Although current tax-exempt yields do not appear to be compelling to most market participants, we are of the opinion that it is not yields that are attracting investors to munis but the fact that they are not stocks,” said Patrick Luby, senior municipal strategist at CreditSights. “We believe that investors are actively rebalancing their asset allocations to reduce equity market exposure. Consequently, significant sums of new money have been flowing into fixed income funds, not all of which appears to have been invested.”

Since the end of 2015, municipal bond mutual funds have held an average total of $42 billion of liquid assets, according to CreditSights.

“We believe that the market environment has discouraged managers from locking in yields, but that because of the difficulty of finding block-sized well-structured bonds, an increase in new-issue supply can motivate mangers to put money to work — particularly since yields have ticked higher recently,” the CreditSights report said.

Part of this all has to do with the growth of assets in professionally managed products such as mutual funds and exchange-traded funds, as well as separately managed accounts, which are difficult to track accurately, according to CreditSights.

Those moves mean that portfolio managers are often much more interested in investing in the primary than in the secondary market.

“It is our opinion that one result of the ‘professionalization’ of the muni market is that a lack of primary supply can lead to a lack of interest in the market, but that a surge in new issuance can attract interstate from those managers who need to put money to work and want the block sizes and best available call protection that is available in the new issue market,” the report said.

“Of course a meaningful cheapening in yields can quickly attract buyers to the secondary market, as we saw last year when muni yields briefly got cheaper than the after-tax yields on comparably rated corporates and attracted money from corporate investors (such as banks and insurance companies) which had been mostly absent from the market,” the report said.

While CreditSights views current sector and credit spreads as having moved “about as far as they can, we think that the current back-up in yields and the likely seasonal increase in the new-issue volume may combine to encourage fund managers to put some of their liquidity to work in the new-issue market,” the report said.

“While aggressive new-issue scales and resultant bumps in the benchmark yield curves may help drive price evaluations and total returns, it may not translate into increased demand in the secondary market, particularly with spreads having so little room left to move.”

The Dublin Unified School District, California is set to sell $116 million of general obligation bonds at 12:30 p.m. eastern on Thursday.