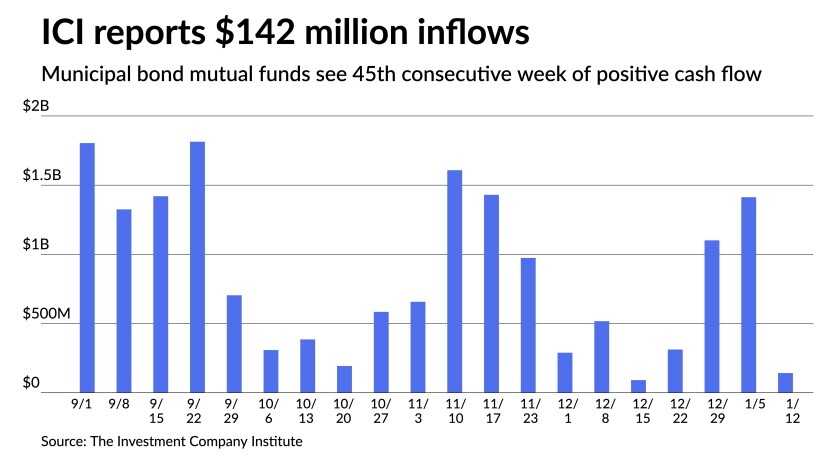 The Investment Company Institute reported a large drop of inflows into municipal bond mutual funds at $142 million in the week ending Jan. 12, down from $1.413 billion in the previous week.

It marked the 45th straight week of positive flows into the long-term funds and exchange-traded funds saw inflows at $460 million after $268 million of inflows the previous week.

Inflation and Fed-related losses in U.S. Treasuries continue to weigh on municipals. However, tax-exempt outperformance is expected this month and next due to substantial built-in reinvestment demand, said Matt Fabian, partner at Municipal Market Analytics.

Last week, bond yields climbed again, with the curve bear-flattening in reaction to higher Fed forecasts and the economic effect of such expectations farther out.

Municipal benchmarks saw only minor corrections, with the majority of that occurring on Tuesday and Wednesday as a catch-up from the previous week.

“There remain highly conflicting economic data about; still rising infections and, most notably, COVID-related deaths, along with the lack of momentum for the Democrat’s Build Back Better stimulus bill, suggest, at a minimum, caution with respect to otherwise strong consumption and related growth,” Fabian said in a weekly Outlook report.

And inflation, even if it is a result of post-pandemic consequences, is likely to dampen growth if it puts downward pressure on employment and investment, he said.

Tax-exempt munis are still susceptible to flows and net supply. January was a particularly strong month for reinvestment demand compared to the previous year, and February is expected to be just as strong, Fabian said. However, when the market turns less optimistic in March, ongoing decline in Treasuries is more likely to lead to more unkempt tax-exempt weakness, he said.

Fabian said despite rising investor price discovery via the Bloomberg PICK system — at its highest level since 2019 — net customer trading activity continues strong. Net customer purchasing was the strongest of the year last week and even reclaimed its long-term trend line, Fabian said.

“In other words, while yields have risen, demand has not been interrupted, and credit spreads, reasonably, are still quite tight,” he said.

The average seven-day simple yield for the 150 tax-free and municipal money-market funds remained at 0.01%.

Taxable money-fund assets lost $63.6 billion, bringing total net assets to $4.474 trillion in the week ended Jan. 18. The average seven-day simple yield for the 780 taxable reporting funds was steady at 0.01% from a week prior.

Treasuries were stronger, except on the two-year, and equities ended in the red.

Rate hikes will bash bonds
After getting a taste of how the bond market might react to Federal Reserve rate hikes, analysts see the outlook for bonds worsening this year.

While the Fed’s hawkish plans will have “only limited impact” on growth and most likely inflation, DWS Group U.S. Economist Christian Scherrmann said, “We had not expected a good year for government bonds anyway, but it could now be worse.”

But rising bond yields may be viewed “as in line with fundamentals and a solid economy, and this is consistent with our unfavorable rating on long-term fixed income,” said Wells Fargo Investment Institute Investment Strategy Analyst Luis Alvarado and Global Fixed Income Strategist Peter Wilson.

Overall, they say, “higher Fed policy rate and rising bond yields can be viewed as a positive given they are more in line with fundamentals and a solid economy.”

Markets have gotten used to central bank support, “and very gentle unwinding when appropriate,” he said. “This is quite a shock to the system.”

Inflation has been higher and stickier than expected, noted Anwiti Bahuguna, senior portfolio manager and head of multi-asset strategy at Columbia Threadneedle Investments. “If the various forces keeping inflation high ease next year, then the Fed can implement rate hikes in a measured fashion,” she said.

While inflation is high enough to justify rate hikes, she said, “the usually reliable labor market dynamics are much harder to discern. Sector-specific labor shortages are creating distortions in wage gains.”

Also, maximum employment is open to interpretation. “If we see continued inflationary pressure and improvement in the labor market, we may see a much swifter pace of action from the Fed,” Bahuguna said.

Economists polled by IFR Markets expected starts to slip to 1.65 million and permits to fall to 1.701 million.

This will add pressure to home prices, which “soared to record levels in 2021,” said Kelly Mangold of RCLCO Real Estate Consulting. Despite this, “the rental market has seen unprecedented rent growth, so home seekers are left with limited affordable options and may be more willing to accept higher prices.”

St. Louis County to price convention center bonds after a long delay
This flashy Bel Air mansion that was listed at $87.8 million flopped at auction — and now the seller is furious
Ski In Your Own Backyard At This $17.5-Million Vail Valley Luxury Log Cabin
Fed’s Mester backs half-point rate hikes in June and July
Twitter plans to enforce $44bn takeover price with Elon Musk